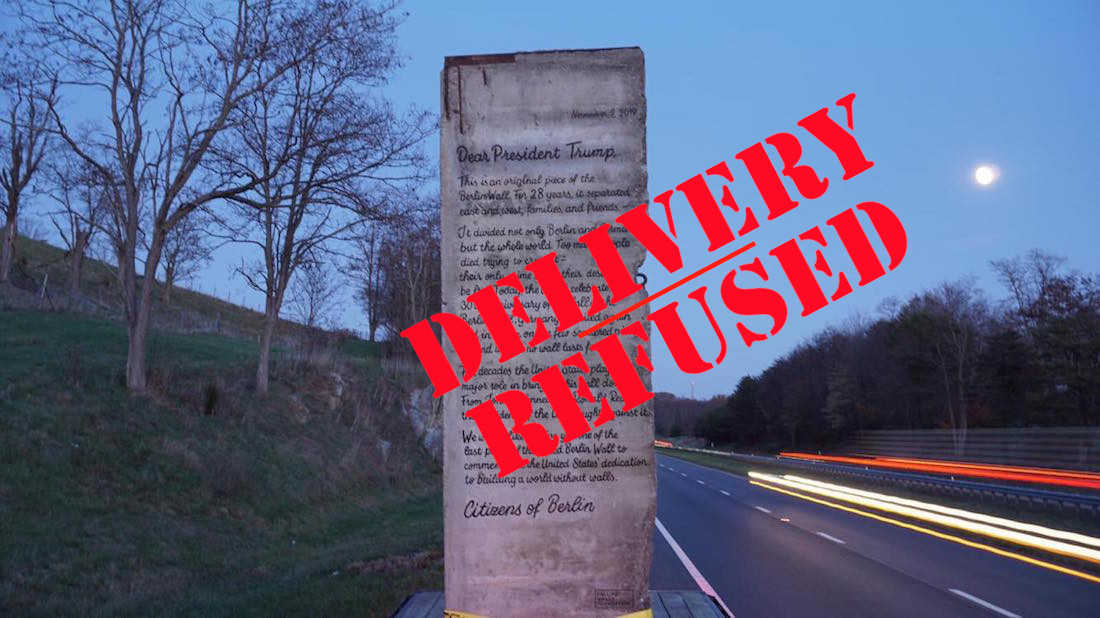 On the occasion of the 30th anniversary of the fall of the Berlin Wall, the Initiative Offene Gesellschaft has sent a complete segment of the Wall to Washington D.C.
The segment is to be seen as a letter and at the same time as a reminder to the then President Donald Trump.

With the campaign Wall against Walls the Initiative Offene Gesellschaft wants to remind the President of the american commitment to a world without walls and an open society.
However, the White House has refused to accept this gift. But according to the Initiative Offene Gesellschaft a gift to the president is also property of the American people, following that the segment went on tour across the states from Washington D.C. on the East Coast to San Diego, California on the West Coast – in order to give as many people as possible a chance to see it.

The text on the Wall segment reads:

Dear President Trump,
This is an original piece of the Berlin Wall. For 28 years, it separated east and west, families and friends.
It divided not only Berlin and Germany, but the whole world. Too many people died trying to cross it – their only crime being their desire to be free. Today, the whole world celebrates the 30th anniversary of the fall of the Berlin Wall. Germany is united again and in Berlin only a few scattered pieces remind us that no wall lasts forever.
For decades the United States played a major role in bringing this wall down. From John F. Kennedy to Ronald Reagan, the Presidents of the USA fought against it.
We would like to give you one of the last pieces of the failed Berlin Wall to commemorate the United States dedication to building a world without walls.
Citizens of Berlin