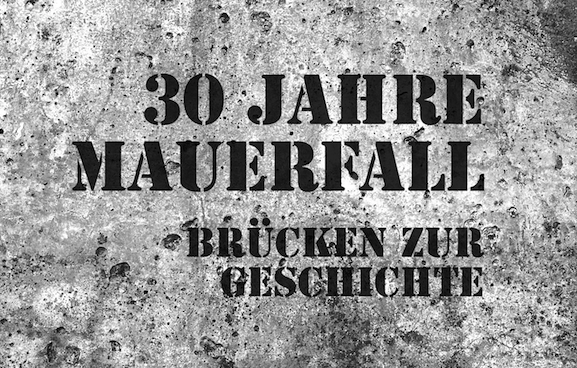 The analogue/digital exhibition 30 Jahre Mauerfall – Brücken zur Geschichte on the occasion of the 30 years anniversary of the Fall of the Berlin Wall displays examples of how the Wall was used as a means of governmental repression and turned into an object of worldwide cultural value.

Until 9 November 1989, the Berlin Wall was the ultimate manifestation of separation and the Cold War. This very night, though, the people changed it into a symbol of freedom, human rights, and the Peaceful Revolution.

The Wall Tells Stories. Everywhere A Different One.

In Berlin of 1989/90 demands were clear: The Wall has to go – as soon and as entirely as possible. Yet, numerous segments of the distinctive inner city parts of the Grenzmauer 75 have stood the trials of time.

1.2 m in height, 3.6 m in depth and with a weight of 2.7 tons, these pieces are currently dispersed all over the planet.

Formerly parts of a dividing bulwark, they now form a global network. What used to seperate, is now a worldwide unifying symbol of remembrance, commemoration and peace.

Not only the symbolism underwent change but also the segments themselves transformed: They were ideologically charged depending on their respective exhibition site. Hence they became pieces of art, monuments, or memorials.

How does the Berlin Wall connect us to historical events? The exhibition 30 Jahre Mauerfall – Brücken zur Geschichte juxtaposes a selection of locations and specific historical footage in order to establish astonishing correlations.