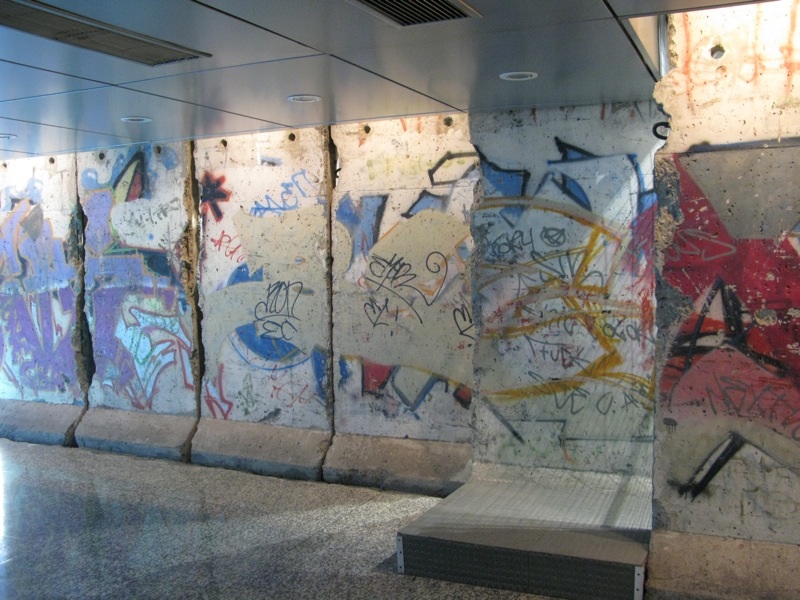 Location: in the lobby of Editoria Perfil

Editoria Perfil is the largest Hispanic publishing house with numerous newspapers and magazine. Immediately after the fall of the Berlin Wall, the publishing house wanted to get some parts of it as lasting witnesses of the historic event. Jorge Fontevecchia, CEO of the Perfil group, recalls:

The Wall fell on a Thursday night, just before the release of our news magazine. The normality of being able to publish the magazine, to have the freedom to do so, became suddenly clear to me. It was this, what the people behind the Iron Curtain were grasping at.
Some time later I called the East German ambassador with the request for some Wall segments. After consultation with his government, it was only accepted if we financed a school in return, which of course we have done. Irony of the economy: Due to the desolate exchange rate, financing the school was significantly cheaper than the transport of the Wall segments. (Source: Editoria Perfil)

The segments are now part of the interior design of the 2015 opened new headquarter, home of all editorial offices of the publishing group (right picture).

Photo above and background:
© by Ian Kath. Licensed under CC BY-NC 2.0